It’s been nearly seven decades but the fascinating stories from the Second World War continue to reveal themselves. It’s nearly impossible to understand in this digital age the type of person who would willingly leave their posh position as a prestigious college professor, architect or sculptor to don a uniform and head into the thick of a global firefight, but that was then and this is now.

George Clooney stars, co-wrote and directs “The Monuments Men” an intriguing albeit embellished real-life story based on the writing of Robert M. Edsel about a group of out-of-shape, middle-aged art geeks who are given the seemingly impossible task of protecting the Western world’s more important pieces of art.

Frank Stokes (Clooney), a Fogg Museum art historian, convinces President Roosevelt to commission the Monuments, Fine Arts and Archives program. It’s the spring of 1944 and the Allies mistakenly bombed the Monte Cassino in Italy, disregarding a Presidential order to protect historical sites and important art. Furthermore, the Nazis burned Florence to the ground as they retreated out of Italy. Thousands of years of Western culture were being blown to pieces

So Stokes assembles a group of art experts to travel to Europe and advise commands to avoid these historical sites as well as recover a trove of valuable art that the Nazis have stolen to fill the Fuehrer Museum- at this point a pet project of the failed artist. His friend James Granger (Matt Damon) an expert restorer, Walter Garfield (John Goodman) a sculptor, theater buff Preston Savitz (Bob Balaban), Donald (Hugh Bonneville) an alcoholic British museum head, Parisian painting instructor (Jean Dujardin) and architect Richard Campbell (Bill Murray) sign on to support the project.

They’re obviously not military men, but their intellect gets them farther than what is expected – Stokes tells the men early on that they were expected to fail. So, after a brief basic training in England the group heads to Normandy to begin their mission – Granger receives a special mission and heads to Paris alone in search of clues about the stolen art.

Though the film is about art, there are very few pieces actually shown but instead the team focuses on two particular works – Michelangelo’s sculpture Madonna of Bruges, and Hubert and Jan van Eyck’s “The Adoration of the Mystic Lamb,” a 12-panel altarpiece stolen from Ghent, Belgium by the Nazis. Flashes of other works are quickly shown to include “Portrait of a Young Man” by Raphael that was stolen from Poland by the Nazis and has never been recovered – it’s shown burning in the film.

The team splits into groups of two and heads their separate ways. Most meet a measure of success, especially Savitz and Campbell, but, unfortunately, the realities of war touch all those who tempt fate. Granger meets Claire Simone (Cate Blanchett) who is imprisoned for collaboration with the Nazis, but we see early on that she’s anything but a collaborator. It’s apparent she has a wealth of knowledge about where the stolen art from Paris was sent, but after working with the Nazis she doesn’t believe the Americans will return the art but instead keep it. But, it’s Matt Damon so she eventually relents.

Granger links up with the remaining Monuments Men as the war comes to a close, and they end up in a race against the oncoming Russians who have a task force charged with collecting the spoils of war.

It’s pretty evident where the movie eventually heads, and there are times when it’s unbearably slow. The characters are woefully underdeveloped, and the comedic relief falls flat throughout. But, the story is simply too interesting not to keep your attention. This film could have been absolutely amazing, and it had its moments.

The scene that briefly revealed the film’s lost potential was when Campbell and Savitz are in a camp during Christmas and receive care packages from home. Murray’s character heads to the showers and Savits plays a recording Murray’s grandchildren sent him over the PA system. It’s a message and they sing, “Have Yourself a Merry Little Christmas.” The camera focuses on Murray’s face. His emotive expressions switch in and out with a corresponding scene as Clooney and his driver who are at a field hospital desperately trying to save the life of a Soldier they found on the side of the road. This description doesn’t do it any justice. But, it was the most emotional I’ve felt in ages watching a film – don’t judge me see if for yourself. The scene is worth the price of admission. If you can get through it without your eyes welling up with tears, than a stop at the local psychiatrist on your way home from the movie would probably be a wise decision.

“The Monuments Men” is rated PG-13 some images of war violence and historical smoking. 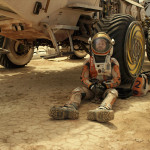